As we approach our behbeh's 14 month, we are faced with a barrage of talking, laughing, and walking. She's a jibber jabbering motor mouth, and sometimes it's in English.

She's also repeated "Kim" when we introduced her to our friend's baby Kim, and she's repeated "Peh-tee" for pretty. She understands far more than she speaks. We're able to speak in complete sentences to her and she can pick up what we're asking of her or what we're telling her. It's incredible to see how much children pick up. We've been more careful about what TV shows we let her watch because we noticed she would get more whiny after watching certain shows where the characters whine to their parents (aka Caillou, etc). When we made a conscience effort to avoid those shows, her behavior changed back.

My favorite new trick is to run my finger over her mouth and make her sound like she's in front of a fan. She laughs and then does it to herself. I will get it on video one of these days. 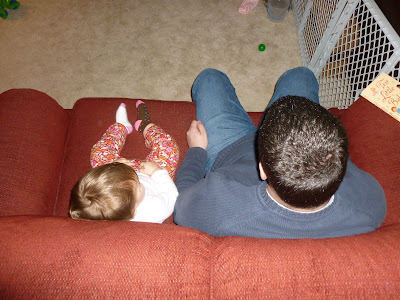 Joanna is still in cloth and we've been able to add 2 new diapers to our stash! We also had a minor fiasco in getting our velcro cloth diapers converted into snaps. The converter is wonderful and has been working with us during our trials and tribulations. I underestimated how annoying it can be to send a package during the holiday influx. The converter also had an emergency of her own. A process that usually takes a week and a half took over a month. But it's okay! Because we'll soon have 6 newly converted diapers and my sister-in-law will have 18! (Which means she'll be able to cloth diaper full-time!) Yay cloth!