The None More Black Scarf

10 days after my dad died, we all joined my in-laws for Christmas. It was very bittersweet with moments of joy, laughter, and painful realizations.

My in-laws love games. One of the games we played was a version of White Elephant/Dirty Santa but just for the girls. My sister-in-law purchased and wrapped 6 gifts, placed them in the middle of the room, then gave us each a number at random. We went one by one either selecting a present to open or we could use our turn to steal something that had already been opened. On the third steal, the item could no longer be stolen.

We opened the packages one by one and saw thick, velvety cowl scarves or luscious gloves. On my turn, I decided to steal an already stolen scarf because of its beautiful color. More opening and steals occurred, and to my dismay, someone decided to steal the scarf I had. I tried to playfully run away and hide it so perhaps give a hint that I didn't want it stolen. She stole it anyway. I ended up with a black velvet scarf - the darkest fabric one can wear. (Puppeteers often use it so they can disappear in the background of live performances or recordings rather than use a green screen. You could even say there's none more black.) I had the chance to steal someone else's but I was so upset and sad that I decided to keep it so that no one else would feel the disappointment of having their sought after item stolen. I later went into the bathroom and cried. 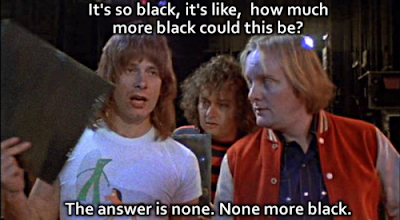 Of all the colors in the world, I had the one for disappearing. I ended up giving it away.

A few weeks later, the person that stole the beautiful scarf from me ended up mailing it back with a note that said, "GOTCHA!"


I've been too sad and embarrassed to ever actually wear it. It's still hanging in my closet.
Email Post
Labels: black christmas game grief grieving