I am nearly done giving things away that were meant for him. I bought 11 cloth diapers from a friend to help me diaper two babes. I bought them with Joanna and him in mind, so it's not as hard on me to use them for Joanna.

The last thing for him is a Captain America onesie - I'm not ready to give it away. It's the very first thing I bought for him. I bought it nearly a week before we had a positive test - I knew I was pregnant. Maybe I could frame it? We don't have any photo of him. The only visual memory I have of him is the sonogram I had in the ER - with no heartbeat. That's no way to remember a child. It's like keeping a photo of a casket. I have the photo of our positive pregnancy test, but it's kind of weird to frame something I peed on. 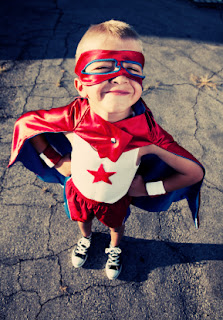 In other news, I had my blood drawn again today. My hormone levels aren't back to normal yet - my body still thinks I'm pregnant. That means my body isn't done with the process yet. A part of me finds comfort in knowing a part of him is still here. It gives me more time with him before I have to completely say goodbye. I think God did that on purpose. He does everything on purpose.
Email Post
Labels: baby death loss miscarriage mourning sonogram super hero