Baby Led Weaning is a different approach to introducing one's child to solid food. For more information, the website Baby Led Weaning is a great resource. (When they use the term "weaning", they mean it in the British sense of "adding secondary foods" as opposed to the American meaning of "put that boob away and give your kid a bottle".)

As you know, I am "crunchy peanut butter." I look into crunchy things (i.e.: cloth diapers, amber teething necklaces, natural remedies, etc) and I take what works and leave out the rest. When I first learned about baby led weaning, I thought it was for the super hippies that had gardens instead of lawns. I didn't give it a second thought for several months. 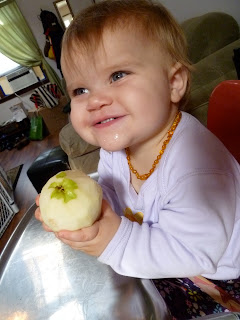 A brief history: I EBF (exclusively breast fed) for one month then put her on formula because my boobs broke. Joanna started solids at 4 months old and cut her first tooth at 4.5 months. She loved chunky purees and she ate nearly anything we shoved into her mouth. We felt like we didn't need to do baby led weaning, so we didn't.

Fast forward 7 months and Joanna is very interested in anything we eat. After attending a Motherhood Collective Cafe meeting about baby led weaning, I noticed she devoured every sample that was distributed. From black beans to blueberries to large slices of strawberries - she played with them, took bites, and wanted more. When we got home, I began giving her actual "whole" food items instead of pureeing or cutting into small swallowable pieces. I immediately noticed that she was having more fun and I was doing a lot less work.

We started with a peeled pear so she could taste it immediately instead of messing with the skin. You would have thought she was eating bananas again for the first time - she LOVED it. We then gave her an apple with only a section that was peeled. She ate from both peeled and non peeled sections. Next was a red pepper - holy Moses does she love those things. We then gave her some shredded chicken. She wasn't a huge fan but she did like playing with it.

As we approach the switch from formula to milk, I am very glad I made the switch from purees to "whole" foods. It is much easier and much more fun for both of us.
Email Post
Labels: apple baby food baby led weaning banana chicken eating food pear puree