[WARNING: Post-pardom hormones. The feelings expressed in this post are now gone, but rather than hide the reality of hormones, I wanted to publish my thought process today. I don't want pity - I just want to make sure other women know they aren't the only ones.]

I'm a member of several mommy groups on Facebook. Most of the groups are "crunchy", meaning the mamas are natural in as many ways as possible. (cloth diaper, breast feeding, drug-free and/or home births, amber teething necklaces, etc). I personally define myself as crunchy peanut butter - I'm only crunchy when it saves me money and/or time. But I digress.

I have zero regrets about my scheduled C-section. I have zero regrets about using cloth diapers. However, my inability to nurse still irks me. I love the extra time I gained when I stopped spending 75% of my days and nights with either a machine or an infant attached to my boob. Even though I stopped nursing nearly 7 months ago, I still get insanely jealous of women whose cups overfloweth.  I was lucky to get 2 ounces a day when pumping (most women can pump 2 ounces in 5 minutes). I was so blind by my desire to nurse exclusively that I couldn't see that Joanna was starving; she lost almost 2 pounds before her first month checkup. My babe's health was far more important than my pride so we started giving her formula in addition to whatever additional milk I could provide. Soon after, I got very sick and completely dried up. #bodyfail 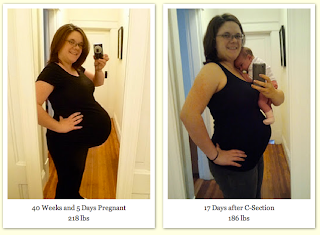 I'm especially jealous of women who easily lost weight after giving birth. I haven't zipped a fly in a year and a half. The few times I've attempted to wear non maternity jeans, I end up in pain if I sit too long. I know I had a 10 pound baby, but I had that 10 pound baby 9 months ago. It took 9 months to get fat - I thought it would take 9 months to at least get back into non maternity clothes, even if they weren't my pre-prego clothes. My stomach protrudes the same it did at 2 months post-pardom even after completely changing my diet.  I try exercising whenever I can. I lost inches in my waist, hips, and arms but the stomach is still the same. As the picture states, I was 186lbs at 2 weeks post pardom. I now weigh 180lbs. Not cool, body.  wwtf = what's with the fat?

I'm tired of seeing other moms wearing normal clothes sooner than me. I hate that my body failed to feed my baby and is now failing to shrink. I'm fed up with feeling not good enough.


*sigh* I'm just feeling fat and unaccomplished. I'm realizing now that this is most likely post-pardom depression from Buddy and not the skinny hippies on Facebook bragging about the endless supply of milk in their freezer.

I just want to be a good mom and a hot wife to the two people I love most.