I had 2 other tests in my towed car, so after we paid $90 to the very nice people who took my car, we drove home and I peed on two more tests. Both positive :) 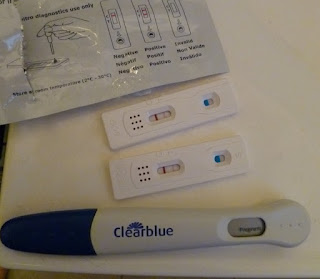 The internet says I'm due on October 23rd. I made an appointment and they won't be able to see me until March 21st, which is when I'll be 8 weeks. So this little baby is either a Las Vegas baby or a Christmas baby (since my last period was late and so light). We'll find out soon!
So far my symptoms are just ill fitting pants and general soreness like I did too many sit-ups the night before. We're still in disbelief - a year of waiting, hoping, trying, praying, and now we are pregnant because we finally surrendered to God. wow wow wow
Email Post