Today was quite a day! I forgot to put makeup on this morning, which NEVER happens. Despite my non-mascara'd eyes, work was a good day as usual. At the end of the day, I left to get to my car - except it wasn't there. I GOT TOWED. It's the emptiest feeling to walk out into the parking lot and not find your car where you put it. I called Jonathan to see if maybe he drove it home instead of his, he didn't pick up. I called the towing place to see if they had my car - they did. It was waiting there for me. Ugh. Called Jonathan again, no answer. Called Amanda, no answer. Called Cami, she picked up! YAY! She picked me up and drove me to my house before small group. I hurried home, tried to find a cute outfit since we were going to be taking a group photo, got my guitar, got food supplies, and we headed out.

Also, Cami told me she is pregnant!! For the first time I cried tears of joy, not anger or jealousy. God is definitely doing a number on me! She told me before she told the rest of the group because she knew I'd be sensitive about it. She told the rest of our small group that she was pregnant and we were so excited for her! Throughout the night, the ladies would try to check in with me and ask how I was doing or if I was okay - I was fine. Surprisingly I was getting more agitated with them asking if I was okay than I was with her being pregnant before me.
After she drove me home, I was cranky and in a bad mood with Jonathan - and he was so sweet. He bought me the Starbucks Valentine's bear I wanted and I was still in a bad mood. "I just want to take a pregnancy test but I don't want to be disappointed.. should I take a test?" He said yes, so I did but I didn't want to look at the results. I made Jonathan check after 3 minutes.

I ran over and saw his face with a look of half horror and half excitement, then I looked down: 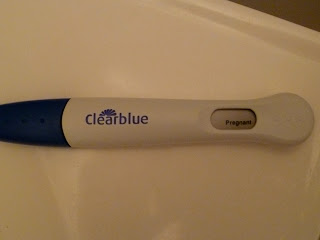 WOW - it is clear as day - PREGNANT. Holy crap. Jonathan started jumping up and down, I was dancing, and our lives changed forever. 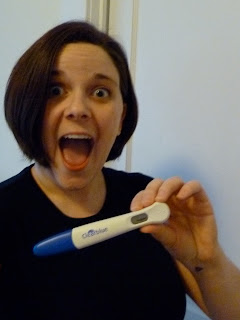