You know when you re-watch some of your childhood favorite movies and you say to yourself, "Why did I ever like this crap?"

That didn't happen to me this weekend.

I saw The Muppets this weekend: it's now in my top 10 favorite movies of all time! James Bobin (director from Flight of the Conchords) and Jason Segel (writer and star) did a beautiful job capturing the spirit of Jim Henson while bringing some off-beat humor to the screen. It's no surprise that the music was hilarious since the Music Director was non other than fellow Conchord Bret McKenzie. Even "Mel" (Kristin Schaal) made an appearance in the movie! 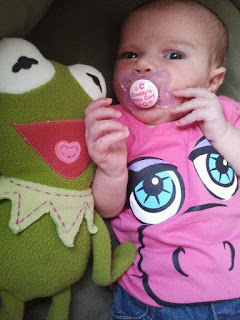 I don't want to give anything away because I want everyone to see this movie. I can say that even people who don't enjoy musicals will enjoy this movie. It's happy, upbeat, and off-beat. You also don't need to know anything about The Muppets prior to seeing it, but it does help with some of the jokes.

The only thing that would have made this movie better is if Pixar was involved. But wait! They kind of were! Pixar debuted their newest short film, Small Fry, prior to the Muppets.  Like The Muppets, Pixar maintained the spirit of Toy Story in this short film. It was funny and heart warming. Awwww.


So why am I posting a movie review on my blog about Joanna? Because I can't wait to share the Muppets with her! It's like I'm bringing up a box from the basement that's full of my favorite things that were waiting to be shared. She's my little Beaker :)

One of the best parts about seeing the movie with Jonathan was watching and listening to the kids in the theater with us. The little girl who sat beside us was leaning forward with her elbows on her knees, hands holding her head up as she eagerly absorbed every moment. That's going to be Joanna one day :)
Email Post
Labels: funny picture