From the fiery pits of Mordor came a guttural yelp from our tiny hairless Hobbit: Joanna has diaper rash.


A few days ago, I put a disposable diaper on her because I thought she was going to poo and I just did laundry. She took longer than usual so I just kept it on until she peed. Little did I know that letting her stay in her disposable for an hour would lead to the worst diaper rash I have ever seen in my life. Yet another reason I am SO thankful we are doing cloth! 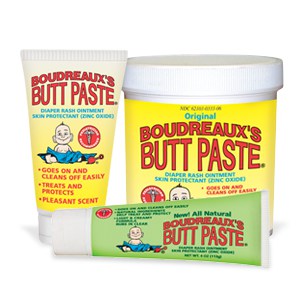 Her diaper rash is still here but it's getting better. When we first saw her bright red bum, we didn't have powder or cream because we didn't need it with cloth. After some digging, I found a sample we had from the hospital of Bourdeaux's Butt Paste. If we used disposables, this product would be the best choice ever. Because we're in cloth, I have to hand wash it to attempt to get all the oil off. It made her butt better but nearly ruined the $17 diaper!

So what is a Cloth Diaper-er to do with diaper rash? After some googling, I discovered the best (and cheapest) cure ever: Breast milk! I've been using it anyway on her dry skin. It makes perfect sense that it would work on her chapped bum, too! On some of the more raw parts, I used the lanolin that I had left over from my nursing days. Lanolin can stain diapers, too so I'm letting her bum "air out" with the lanolin before wiping it and putting a new diaper on.

-------
After another day, it cleared up completely! That's more than I can say for the poor cloth diaper. After 3 more turns in the washing machine, it's still stained from the butt paste. Lesson learned.
Email Post
Labels: cloth diaper diaper rash diapers