I know every mom says it, but really - where did the time go? 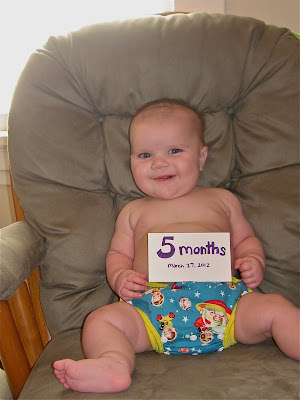 Joanna is super fun instead of a super blob. This has been the best month so far. She's giggly and happy and still pretty immobile. It doesn't get more convenient than this! 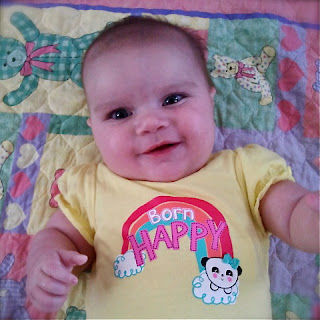 Our pudgy bugaroo-bagoo-bagoo is now approximately 19 pounds.  I don't know the circumference of her head or the length of her body but I know its definitely bigger. This is the first time I've been able to keep her in the same outfits for two months in a row!! That is monumental! The clothes fit her differently but they FIT! She is still in 12 month outfits with an occasional 9 month onesie. Her diapers even fit differently. I've had to readjust the rise on some of them back to the middle setting. Looks like we won't need to fully re-stock our diapers for a while. Phew.

Joanna is getting much better at tummy time. We've made rolling over into a game and she loves it.

She's eating solids 1-2 times a day. Usually the food is made by me but sometimes I'm lazy and I give her Gerber rice or oatmeal.

She sleeps 12 hours each night - she goes to bed between 7 and 8 and wakes up between 7:30 and 8:00 each morning. She slowly wakes up by giving herself a pep talk and discussing her plans for world domination. She even enunciates the punctuation a la Victor Borge. (I guess all of that classical music is seeping through?)

Her diapers are more and less smelly. The morning diapers smell like a rare combination of grape fruit and ammonia. Her daily gifts are easily disposed of into the toilet without much intervention. Cloth diapers = amazing. Still no blowouts and leaks are rare. Leaks are almost always a fault of myself and not the cloth diaper. With her growth, it took a while to realize the rise needed to be smaller instead of making the width larger.

We are so blessed with our abnormally happy and low maintenance baby. I've seen what normal is supposed to be. I've seen what difficult babies can do. We are blessed. I sing "Where Did We Go Right?" at least once a day.